As Google's Android operating system appears on more devices, more companies are extending the platform to develop custom user interfaces for their products. Though Google freely distributes Android and allows anyone to adapt its open-source components, they maintain control of the services (applications) they distribute with Android like Maps, GMail, Google Voice, and more.

"This can lead to mainstream (and confusing) issues [...] Android OS supports multitouch, but Google's Android apps don't. So when a company comes along and decides to properly add multitiouch to the OS, they can only add it to the open-source parts, like the browser (or their own closed-source apps), not Google's proprietary apps. That's why the HTC Hero has pinch-zoom in its browser and photo albums but not in Google Maps, where it's just as at home." -Gizmodo Android Overview

These inconsistencies can result in a disconnected overall user experience. Consider the simple task of adding a new weather location on Apple's iPhone and the HTC Hero (running a custom version of Android). The iPhone is a closed platform so Apple controls the top to bottom user experience including the pre-installed Weather application. As a result, adding a weather location on the iPhone doesn't reveal any inconsistencies. Simply type in "Santa Cruz", get a list of matching locations, and add a forecast for the location you want. 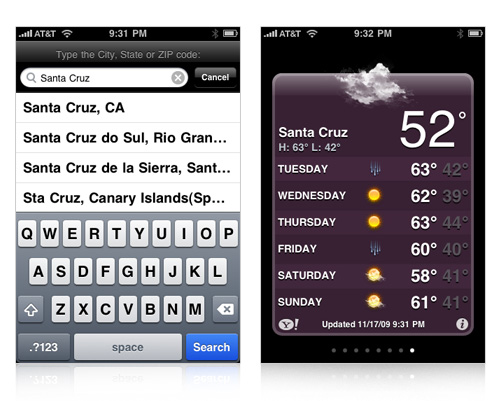 On the HTC Hero version of Android, the experience starts the same but quickly unravels. Once again, you begin by typing "Santa Cruz". This time, however there are no matching locations. Depending on how determined you are, an option to find your location on a map exists. After scrolling and zooming the map for a while, you can find Santa Cruz, CA. If you select it from the map, the right location is now added to the Weather widget. 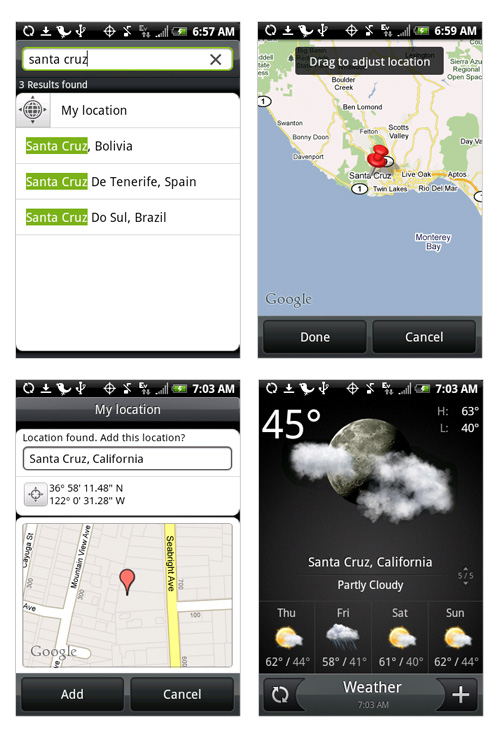 So, what's going on? The Weather widget, though pre-installed in the OS is made by HTC and the Maps application comes from Google. Therefore, it's likely they are pulling from different data sources. But they way the user interface is presented doesn't make this clear. Why can I find Santa Cruz on the map (linked in the Weather widget) and add it but I can't add it using search results (which are also in Weather widget)? For the average user, this kind of inconsistency can be boggling.

While these two examples (multitouch support and location lookup) on their own are not likely to cause huge confusion for people, many such inconsistencies can begin to add up to a frustrating experience. The intersection of open-source modifications made by a handset manufacturer and Google's proprietary closed-source services (like maps) give Android a lot of flexibility and power but can also negatively impact the overall experience of using an Android-powered device.

Rumor has it Google is working on a phone where there "won’t be any negotiation or compromise over the phone’s design of features – they are dictating every last piece of it." This will give the company the same control of top to bottom experience that Apple currently enjoys and should address existing inconsistencies.

Home Home "As far as the customer is concerned, the interface is the product." —Jef Raskin, 2001