It’s hard to get people to download your mobile application. But if they do, what greets them when they open it up for the first time? A step by step tour? A sign up form? Both might be missed opportunities to get people engaged and interested in your service. In fact, you might want to consider a gradual engagement approach instead. Here’s why...

Before diving into gradual engagement, let’s look at the realities of mobile app usage. In 2011, the average smartphone user downloaded about 2.5 new mobile apps a month. iOS users were on the high end with about 5 apps downloaded per month. Even if these numbers have gone up over the past year, that’s still not a lot of opportunity to get downloaded.

If you do get a download, chances are most people won’t stick around. One study found that 26% of all apps downloaded were opened only once and then never used again. Only 26% were used 11 times or more. Of the remaining 48% of apps: 13% are opened only twice, 9% are opened only three times, and so on.

Of course, there are lots of reasons why people don’t use apps on an ongoing basis but your sign-up process shouldn’t be one of them. After all the hard work to get a download, losing new users at sign-up is a significant opportunity lost.

How significant? One very large scale app saw only 25% completion of their sign-up process. Vibhu Norby, the co-founder of Everyme wrote in detail how his app (at best) “retained 5% of users through their entire onboarding process”. In other words, expect a lot of drop-off.

Gradual engagement is the process of moving a user through an application or service – actually engaging with it, and seeing its benefits. With gradual engagement, new users are not just presented with a registration form and then dropped off a cliff. Instead, registration is either postponed, or handled behind the scenes and the first time experience is focused on giving people an understanding of how they can use a service and why they should care to.

This is the approach we took with our mobile app, Polar. Polar is all about sharing and collecting opinions. So out the gates, that’s what we allow anyone opening the app for the first time to do: vote instantly on the polls they see. 87% of people who download the app do.

Here’s how it works. When a new or logged out user opens Polar, they are presented with a list of polls to vote on. We hold on to all their votes so if they ever create a username and profile page, all their votes will carry over. 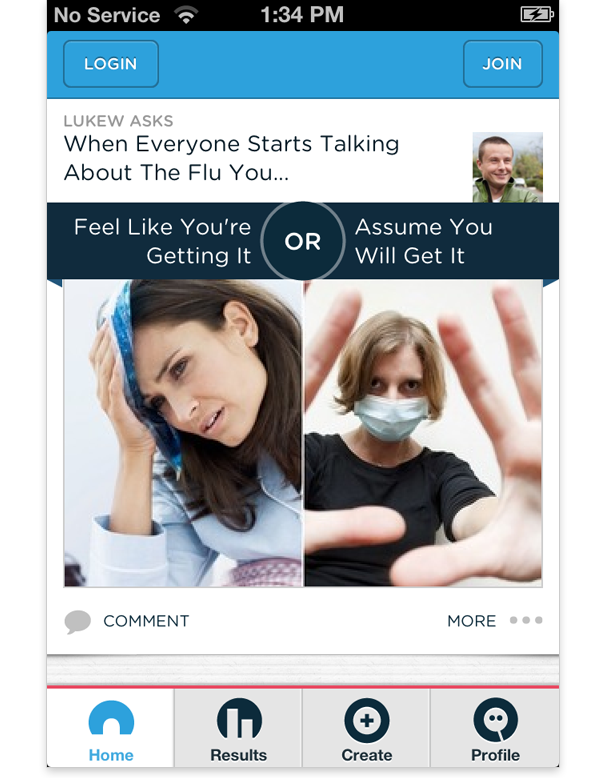 Commenting or creating a poll requires an account and the dreaded sign-up form. But we’ve made a lot of design decisions to make that process as fast and painless as possible. Massimo Pascotto recently wrote an article about the design of our sign-up screen if you’re interested in more.

With gradual engagement we can communicate what our mobile apps do and why people should care by actually allowing people to interact with them right away. We can capitalize on all the hard work it takes to get a download instead of turning 75% of our potential audience away with sign-up requirements.

85% of the over 3.5 million votes on Polar came from signed-in users. But another 15% came from people voting without an account. And we’re happy to give them a voice as well. No sign-up form required.