People interact with touch-based user interfaces with their fingers. So user interface controls have to be big enough to capture fingertip actions without frustrating users with erroneous actions and tiny targets. Ok, so how big? 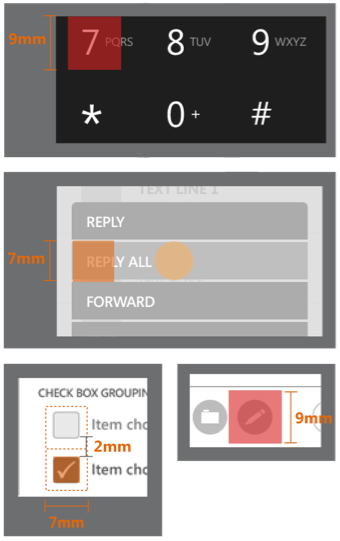 In the iPhone Human Interface Guidelines, Apple recommends a minimum target size of 44 pixels wide 44 pixels tall. Since physical pixel size can vary by screen density, Apple's pixel specifications apply best to the iPhone's 320 by 480 pixel, 3.5 inch display (164ppi). Since the release of the iPhone 4's Retina Display (326ppi) Apple has updated these specs to points instead of pixels.

Nokia's developer resources suggest that touchable interface elements should not be smaller than the smallest average finger pad, that is, no smaller than 1 cm (0.4") in diameter or a 1 cm × 1 cm square. Minimum target sizes for a finger usable UI element are:

The Ubuntu Designing for Finger UIs documentation states the minimum size of buttons and other interface elements should determined by the size of an adult finger (diameter of 16mm to 20mm). When interacting with a touchscreen, users will prefer to use the pad of their finger rather than the very tip. The pad of the finger is slightly narrower than the full width of the finger: 10-14mm. The fingertip is smaller still - 8-10mm wide - but more awkward to use than the pad of the finger. In general, interface elements should be no smaller than 1cm (0.4"). Minimum button size for a finger-driven UI is a function of pixel density, not screen resolution.

An MIT Touch Lab study of Human Fingertips to Investigate the Mechanics of Tactile Sense (PDF) found that the average human finger pad is 10-14mm and the average fingertip is 8-10mm.

Know of any other resources for touch target sizes? Send them my way!

Home Home "Design is shrinking the gap between what a product does and why it exists." —Sahil Lavingia, 2012