Back in June of 2003, while guest blogging at 37Signals, I posted about an increasing amount of "Web Creep" or Web design seeping into our broader visual culture. A recent article from the New York Times tackled this topic in more depth: 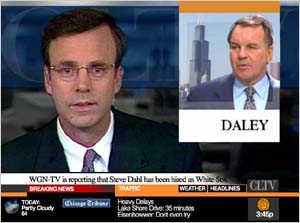 "For better or worse, viewers say, the additions are making the experience of watching television more closely mirror the feeling of using a computer. The trend toward visual clutter has also reshaped television news broadcasts, where the familiar sight of a lone anchor talking to a camera has grown increasingly rare.

Research suggests that packed screens can impede comprehension. Tom Grimes, a journalism professor at Texas State University in San Marcos, Tex., said that people who are looking for quick information like stock quotes or a weather update can handle a certain amount of clutter. But “if they’re trying to listen to a reporter describe a complicated series of events, it’s very difficult to absorb that information” with too great a visual barrage, he said.

With the Internet offering an increasingly sophisticated yet chaotic visual experience, television must decide how much it wants to mimic the computer." -As the Fall Season Arrives, TV Screens Get More Cluttered

Home Home "Questions about whether design is necessary or affordable are quite beside the point: design is inevitable. The alternative to good design is bad design, not no design at all." —Douglas Martin, 1989